The Grandest Monastery of All: Alcobaça

There’s a lot to love about Alcobaça – clever engineering, a monastery filled with gluttonous monks, and a love story more tragic than Romeo and Juliet.

With the monastery, I suppose, since the whole of all the stories is here. Its clunky Baroque exterior isn’t much to look at, but the moment you step inside…

This Cistercian monastery was founded by the first King of Portugal, Afonso I. Because of its favored status with the king, Alcobaça became one of the wealthiest estates in the country. It is said to have housed 999 monks who held Mass 24-hours a day in shifts. Their order was committed to living life exactly as described in the Rule of St. Benedict – so they spent their days in periods of prayer, spiritual reading, sleep, and manual labor.

They got into some trouble, however, after English novelist William Beckford published a travelogue about his visit there (this link will take you to a PDF of the book, opened to the page where he first encounters the church). It turns out the monks weren’t quite as austere as they should have been. Beckford described the kitchen alone as “the most distinguished temple of gluttony in all of Europe.”

Beckford went on to describe the kitchen thus: “Through the centre of the immense and nobly-groined hall, not less than sixty feet in diameter, ran a brisk rivulet of the clearest water, flowing through pierced wooden reservoirs, containing every sort and size of the finest river fish.”

Next door to this giant kitchen is an equally giant dining hall (‘refectory’ in religious parlance).

You’d think that the church, kitchen, and refectory were the star attractions here, but in fact they are not. The tombs of King Pedro and Dona Inêz are. If you’re an opera fan you already know all about this tragic love story, but it was new to me. It’s brutal to the point of disbelief. 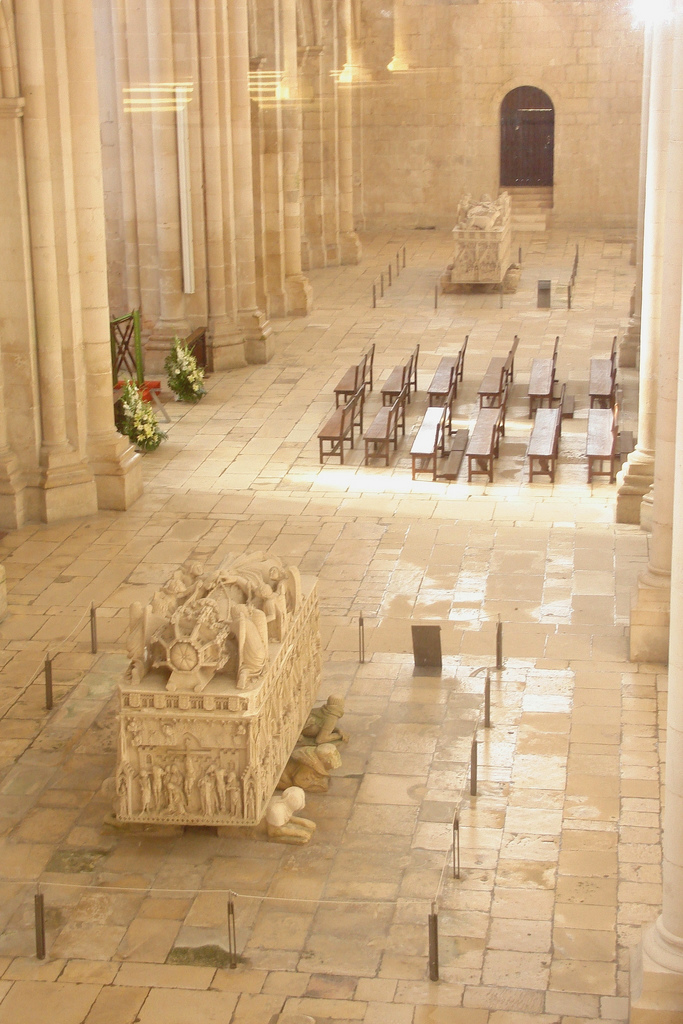 The tombs of King Pedro I and Dona Inez de Castro, arranged so that on Judgement Day the first faces they see will be each other’s. Photo via.

The Tale of King Pedro and Dona Inêz

Our king in this tale is Afonso IV (1291-1347). He was, by all accounts, a decent enough ruler. He kept the peace in Portugal for his full reign and he invested heavily in the Navy. He did have to defend his crown against his illegitimate brother (who daddy liked better) a couple of times, but hey, it’s all in a life’s work if you’re a king.

Anyway, the real trouble began in 1339 when Afonso arranged a marriage for his son, Pedro, to a Castilian noblewoman, Constanza. This marriage was meant to smooth over some bad blood after Constanza’s first husband, Alfonso XI, King of Castile, Leon, and Galicia, had their marriage annulled, and Constanza imprisoned, so that he could marry our good King Afonso’s daughter, Maria.

If you’re the King of Portugal, having your daughter marry the King of Castile is probably a worthy alliance, even if it means a headache with the former wife’s family. And in fairness, both Constanza and Alfonso XI were children at the time of their marriage (she was nine!).

Still, Constanza’s father couldn’t take the affront lying down, so he launched a war against his former son-in-law. This is when Afonso I arranged to have Constanza marry his son, Pedro. It’s like something out of a soap opera. An arranged marriage ends in annulment and the now freed couple end up marrying into the same royal family – he to  the princess and she to the prince. Can you imagine the tension at that family dinner table?

Pedro and Constanza didn’t much like each other, but they got it on well enough to make some babies. This was just fine by King Afonso IV; he needed heirs and peace.

Enter Constanza’s lady in waiting: Dona Inêz de Castro. She was beautiful, she was smart, she was wise (read: she was in her 20s). Pedro took a big liking to her. They fell madly, deeply in love and had several children together. Dona Inêz was also a noblewoman from an important family in Galicia (an area just north of Portugal), so she had the chops to be a queen.

Five years went by and then Constanza, who was probably 16 years old at that time, died giving birth to their third child. Gasp! Gasp on so many levels!

Suddenly, Prince Pedro was free to love who he loved. He began living openly with Inêz, claimed all of her children as his own, and refused to marry anyone else.

Alas, King Afonso IV would not allow the pair to marry. Inêz had loose ties to other royal houses in Portugal and Castile, and her brothers were aligned with a political rival in Castile. When Pedro started favoring Inêz’s brothers at court, the king’s advisers pressured him to do something about it.

So in 1355, King Afonso sanctioned Dona Inêz’s murder. Three men carried out the act and killed her in front of her children.

Little did King Afonso know that Pedro and Inêz had already been married in a secret ceremony in Bragança! AAHHH!!

Pedro was inconsolable. He laid siege to Porto, attempting to take the throne by force. Two years later, King Afonso IV died and Pedro finally became King. He declared Inêz his rightful queen and – get this – had her body exhumed, crowned, and forced his conniving court to pay homage to her by kissing her decomposed hand. What’s more, as the legend goes, he hunted down the men who killed her and had their hearts ripped out in front of him – while he ate dinner. Damn.

He had some pretty elaborate tombs made, and they sit in the church at Alcobaça.

There is quite a bit of damage to both tombs, not shown in these pictures because I didn’t learn about what caused it until much later. Apparently, the French busted through here and looted the place, breaking open both tombs in search of jewels. Later, when the Portuguese government outlawed religious orders, neglect took its toll.

I can’t fully express how much I loved this place. It’s by far been my most favorite stop in Portugal. It’s worth the effort to come here. There are buses from Leiria, but we rented a car for a few days, which made the trip here much easier.